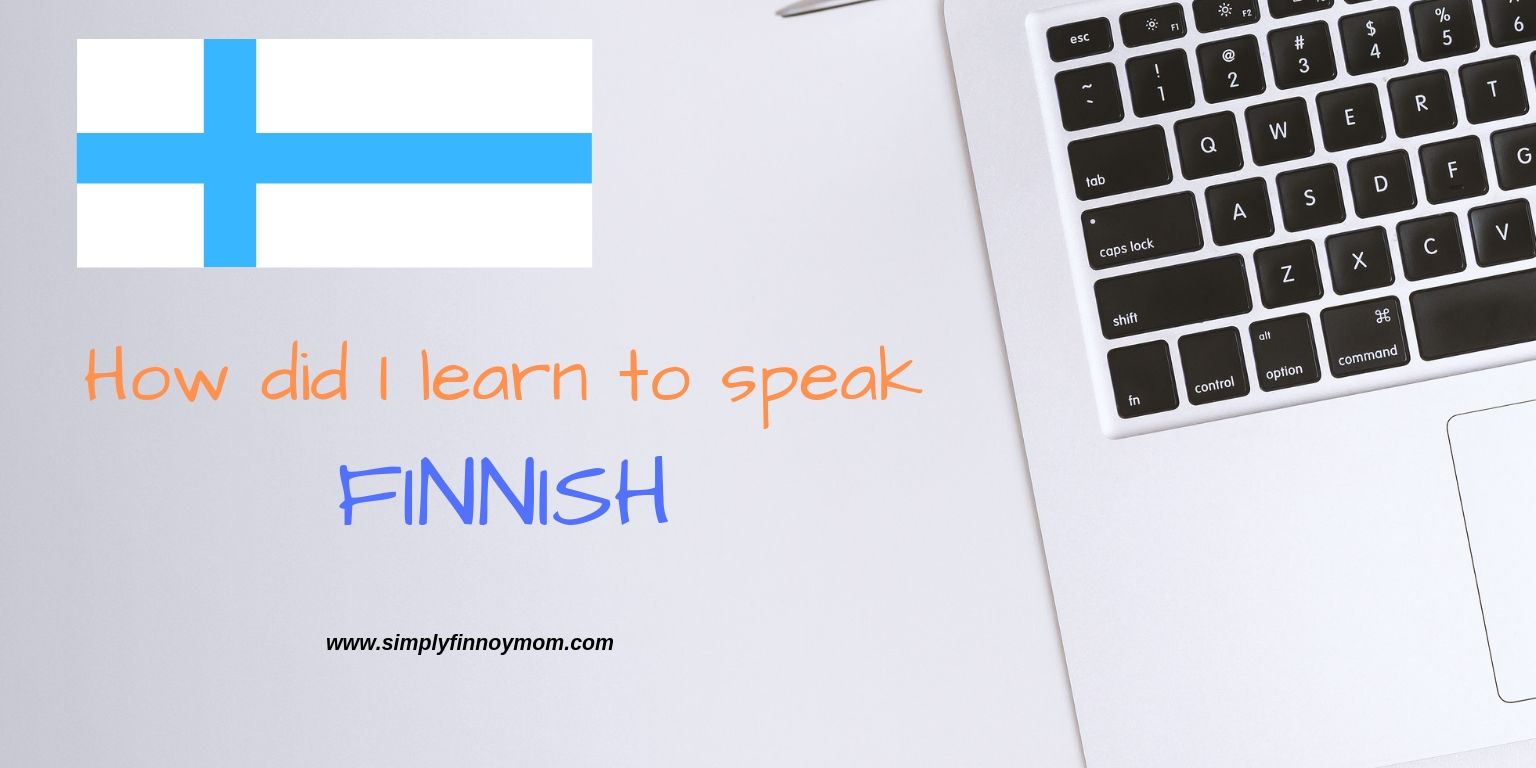 This post may contain affiliate links. That means if you click and buy using my link, I may receive a small commission at no extra cost to you. Please see my full Privacy Policy & Disclaimer for details.

How did I learn to speak Finnish? This is a common question to me whenever I encounter people talking to me in Finnish for the very first time. Do you know that Finnish is not my third language as people often think of it?

I came from the country with more than hundreds of dialect.

Way back in my home country, we have to learn two dialects growing up. My mother tongue and my fathers own mother tongue. My fathers’ hometown is not the same as mine but it is in the same region. Therefore the dialects are different. I came from a country with more than 7000 Islands. Based on Wikipedia, there are about 187 different dialects in my country Philippines. Depending of course on how the method of classification it is based on.

I will give you one example. I was once playing with my fellow cousins in my dads home town, a small island. Then they said this word in their dialect “Makawat kita ki daga!”

The funny part here is that, if I translate the sentence from my dads’ dialect to mine word per word and translate to English, this is how it means like “Makawat” means let’s steal and “daga” means rat. So the direct translation of the whole sentence is, “Let’s steal a rat!”. Of course, I was terrified.

What they mean is that “Let’s play soil/ground”. In my mother tongue that is simple “Makanam kita sin duta”. If you are a child and want to play with your friend and they say something different, you will be surprised. On the other hand, I needed to take a pause, and THINK! think QUICK! I am in my dad’s hometown, which means that those kids are saying something else of course. So then I had to make the translation in my mind and understand what they really mean or what they are saying. That’s very important that I learned my dads’ dialect, I can speak it but I sometimes mixed words still.

Then I learned to read and goes to school. There come the next two official languages of my country which is English and Filipino. From childhood, I have already three different languages plus one extra dialect which makes it four.

Then I came to Finland which is English is not their official language at all. Surprisingly this is my fifth language. Finland is a country with two official languages, Finnish and Swedish. In a news published by YLE (national public broadcasting company) on 14.6.2013, the Finnish language is among the most difficult language for English speakers. If you are an expat like me and plan to stay here for a long time, it is best to learn one of the official languages.

Do you know that you can have a great possibility to enrol in a free Spark your Finnish class? You can easily learn Finnish with a Finnish teacher? I wish I know about Varpu before when I was new here too.

I came to Finland to study at a Finnish University of Applied Science so I selected the Finnish language to study for the language course option. Should have taken both languages but I only took one. Every year of my 4 years of studies, we have about three months of language course for the first three years.

To practice is the key to learn to speak Finnish

However, it was a very short course per year and the break in between not having the course is too long. How did I learn to speak it? I know that there are many free online courses and also nowadays an app. Here is one link for you to start with basic words and phrases.

It started with my aunts’ parents in law. I lived with my aunt and her husband when I was studying and every semester break from school like an autumn break, they bring me to her in-laws in the countryside. They do not speak English at all! How an English speaking foreign student can survive a week or two with them? I had a dictionary with me. I know it was funny, but it was a great start for me. My aunts’ mother in law is very very patient and a good teacher. She teaches me new words by pointing at the object and telling the word repeatedly until I understand and memorize it by heart. Of course, there’s a lot of laughing and sign languages in between! I kid you not, it was fun and entertaining! 🙂

Then I moved out of a bigger city

We used to live in a big city where I work until now but in the big city, everyone speaks in English to me, right away when they see I am a foreigner. How can I learn to speak Finnish then? My husband speaks to me in English because that’s our language of communication, it was difficult to change it anymore. He used to let me read for him the local newspaper and corrects my pronunciation which is very good practice too.

Then we moved to a smaller city where people speaks only Finnish. The neighbourhood is also very friendly and welcoming. I try to speak to neighbours every day when they are outside. Especially when I stay home with the kids and have no one to talk to when the husband is at work. I needed to develop my language skills. They are very helpful. I speak unfluent of course and still have mistakes with the ending of the words but I do speak the language.

Joining a group that only speak the language

As I mentioned earlier, I stayed at home for some time after having kids. In Finland, you can stay at home with small kids until they are at the age of three. Check out my post about that.

So living in a smaller city as an expat plus, this city is not the city where my husbands’ relatives are living, it is quite a challenge. What did I do to learn to speak Finnish while having smaller children? I joined two different clubs where mothers/parents are attending. One is the Perhekahvila or family cafe/coffee club which was organized by the MLL Child welfare where parents who are at home with kids can gather and have some coffee with snacks for the family. While parents, mostly mothers are chatting, children are playing. It was a very good place for me to have interaction with other mothers. I learned to speak even more and I do not feel uncomfortable anymore making mistakes in the words.

Another club is organized by a local church where there is a family club or perhekerho. This is really nice too because there are singing, storytelling, arts and crafts. Sometimes there are groups from family daycare that attends too, so more children and more fun.

Both are once a week meetings which makes it twice a week activities for me to be able to speak Finnish with other mothers.

I am also happy that when I say something wrong in Finnish and my children heard it, they try to correct me with the correct pronunciation. That is the secret on how to learn to speak Finnish. Reading and learning without practising to speak, is difficult.

I like to read books to kids too. Children books are a very good to practice learning how to speak Finnish. It is very clear and there are pictures too that makes it easier to have pictures of what is happening and where the words are being used.

In general, the only way how to learn to speak Finnish is to speak it! I do not feel uncomfortable or shy if I say the word wrong, eventually, if we use the word all the time, we will notice that it is not as difficult as it used to be. As much as possible I try to interact with Finnish people by talking in Finnish, I call and do my appointments in Finnish.

I push myself to learn the language, if I will always try to ask if people in the other line can speak English, then I will be in my comfort zone, I am not forcing myself to learn.

If you are not yet confident of speaking Finnish, there is this paid course Conversational Finnish for Beginners. It is a very nice course.

I also like to speak the language at work when I have the chance to talk with some colleagues in Finnish. So, In general, the most important thing to do is to practice. It is okay to pronounce the word wrong but if we speak the language often, we will eventually get used to the language and it will come naturally.

The Finnish language is difficult to learn, yes! BUT, with the correct attitude and time to learn it, with the proper practice, if possible every day, you will learn to speak Finnish. Learning a new language is a continuous process. We must not stop using it otherwise we will forget it. I am still learning new words all the time and still, I make mistakes of the words ending.

How about you? If you’re an who lives in Finland, is it easy for you to learn to speak Finnish or Swedish? If you are not in Finland, do you speak another language other than your mother tongue? Is it easy or not?

If you are interested to learn the Finnish language, you can enrol in a free course Spark your Finnish. Your teacher will be a Finnish MSc who can speak 6 languages. She’s an engineer and an entrepreneur. If you like her free course and later will decide to enrol in her great Conversational Finnish for Beginners, it is the best option.

The best thing about her courses, you can start them and continue in your own time!