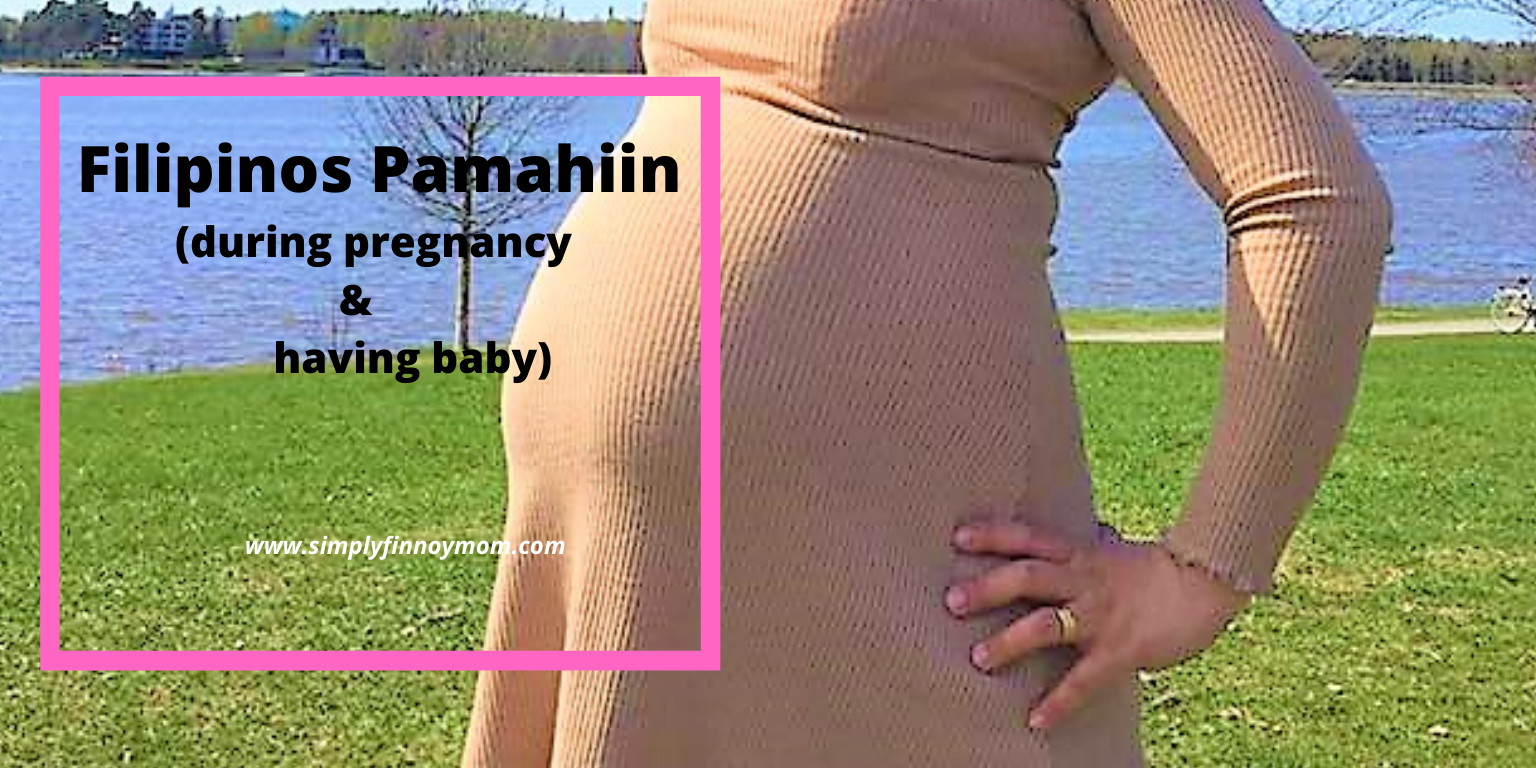 Filipinos or Old wives tale is very strong in my country. Ofcourse there are also during pregnancy and after giving birth. It is very well known to anyone who came from the country to hear at least one from their older relatives or friends.

I have seen many people following some of these Filipinos pamahiin and others are very strict. Now that I am a mother too and I live in a different country I happen to encounter a lot of question about this from a first-time mom in one group.

Filipinos is stronger in the countryside or smaller cities. I do not have anything against this since it is part of our culture that has been transferred from generation to generation but I honestly do not follow one.

I thought so any way to write about it and give my own point of view about it. Do you want to know what are these pamahiin? Here I will give you list from pregnancy until the baby is born.

It can cause some unexpected delay during the delivery. It can prolong and cause uneasiness to the delivery process.

In my opinion, it is anyway clear that there is no way the baby will know that her/his mother has been standing in the door or anyone so that the delivery will cause a delay. If there is some case that the mother has done these or their visitor, I think it’s just pure coincidence and not related to the mentioned above.

Pregnant mom is not allowed to cut her hair.

It is said to have a tendency to have a bald hair, do not remember if it is with the mom or the child.

Well, okay, maybe this is with the mom as after giving birth mom experience a hair loss. So it can be that is the bases of this saying. It is normal to have the postpartum hair loss which normal hair growth will come back around a year after giving birth.

It is believed to be bad luck to take a picture during pregnancy. It can cause something bad to both mother and child during the pregnancy or delivery.

Well, I noticed that this is not anymore being followed by the new generation as it is so common nowadays to have the pregnancy photoshoot.

It is said to cause illness to the mom and the baby specially if the mommy is breastfeeding.

If probably I gave birth in my country, I am sure this is one that might have been followed among all the . It is normal to follow there as not all houses in my country the running warm water. Houses are with open windows usually. Taking shower with cold water is kind of dangerous for a woman who just birth for the tendency to get cold and got sick.

In my case, I gave birth normal delivery to all my four children. I took a shower every day after giving birth, even right after. Only one time I didn’t go to shower right after giving birth because I was then really tired and feel dizzy. The rest, I did. I was able to walk and go to the shower room and wash.

To be honest, this was one of the culture shocks for me being a first-time mom as expat before. As I knew it wasn’t allowed in my home country.

For the case of the baby, my first two kids were cleaned and bathed right after by the midwife before putting their newborn clothes. For the younger two, they didn’t do that anymore. Only wiping, as they said it is not healthy for babies skin to wash right away.

Breastfeeding moms are not allowed to drink cold beverages

Well, this is not only in the Philippines, in fact, but it is also believed that whatever the mommy is drinking goes to the breastmilk. It is true that breastfeeding mothers need to be careful about whatever they are taking.

Alcohol is one, when breastfeeding it is advised to have moderate drinking or avoid breastfeeding in the first two hours after drinking alcohol. A little amount can go to the mothers’ milk but for cold beverages to cause cold for baby is not true.

Cold and flu are caused by a virus and in fact, breastfeeding mostly protect baby from getting flu which baby got protective antibodies from breastmilk.

Avoid breastfeeding when mother is tired or hungry

This is the same as above, the baby is believe to got sick when drinking milk from a tired and hungry mother.

In my point of view, this can be based on the fact that mothers should be careful taking and holding their kids. If they are tired and hungry, they can be very sensitive that they can get angry when baby starts crying. Which is of course dangerous as the person in charge of the small child. Nothing to do with the breastfeeding. Baby cant get the tiredness or hungriness of the mother.

Instead, it is advised to eat often and different healthy varieties (more fruits and vegetables) for the breastfeeding mother. That can help to have more milk production.

There are more Filipinos pamahiin for babies than the previous ones I mentioned. I will tell you few that I remember.

It is not allowed to cut babies nails during evenings

It is not allowed to cut babies nails as it can cause bad luck.

My opinion for this? Well, babies nails are very soft and their fingers are very soft and fragile. I think, it is just a precaution not to cut the nails during evening when there is not enough lights or it is dark. Cutting babies nails too short can cause infection for them if they can get a cut from it. So that is my side for this, could be that’s the reason and not about the bad luck.

First haircut of the baby must put between books pages

It is believed to put the first haircut of the baby between the pages of the books to grow up as a smart kid. Even better if it is encyclopedia books.

Books must be read to get information, it doesn’t have any wireless connection that the hair between those books will copy all the data from the books to the hair. Then transfer it to the babies head. Okay, now I am making fun of this, but this is just not true. I do not know where this started.

Press the babies nose up to get it more pointed nose

I do not know if I even wrote it correctly in English but it is believed to avoid flattened nose by pressing it up.

Seriously? This is something with our mentality when we always wants something what we do not have. Whats with our very own version of nose? If parents are both Filipino and their baby start to look like half foreigner, then that’s something stranged. Otherwise, we must be happy of our own beauty. Do not do this to your baby please, they are beautiful as they are.

Avoid facing the baby to the mirror

It is believed to avoid facing baby to the mirror because they can have speech delay.

I do not know where is this coming from, but with my kids, they all have been facing a mirror. When I put them to tummy time, they like looking at themselves to mirror. There are new born baby books too that have the mirror-like thing, where the baby can see some reflection. They like it actually. They laugh at themselves seeing them in the mirror.

Do not bring the baby outside during evening

It it said to be dangerous to bring the baby outside in the evening, they can catch cold.

It is advisable to bring your baby evening or not outside with the proper clothing. To avoid that baby got cold body, be ready incase it get rainy or anything to avoid baby get cold. It is nothing to do with being evening.

There is much more Filipinos or old wives tale in my country. These are just a few of those I remember. As I mentioned, I do not have anything against anyone following this. As long as you do not harm yourself or your baby. I know it is difficult not to follow this, specially if you live in the country and surrounded with elder people.

I will also once in a while create blog, for my moms. So stay tuned for more /taglish blogs too.