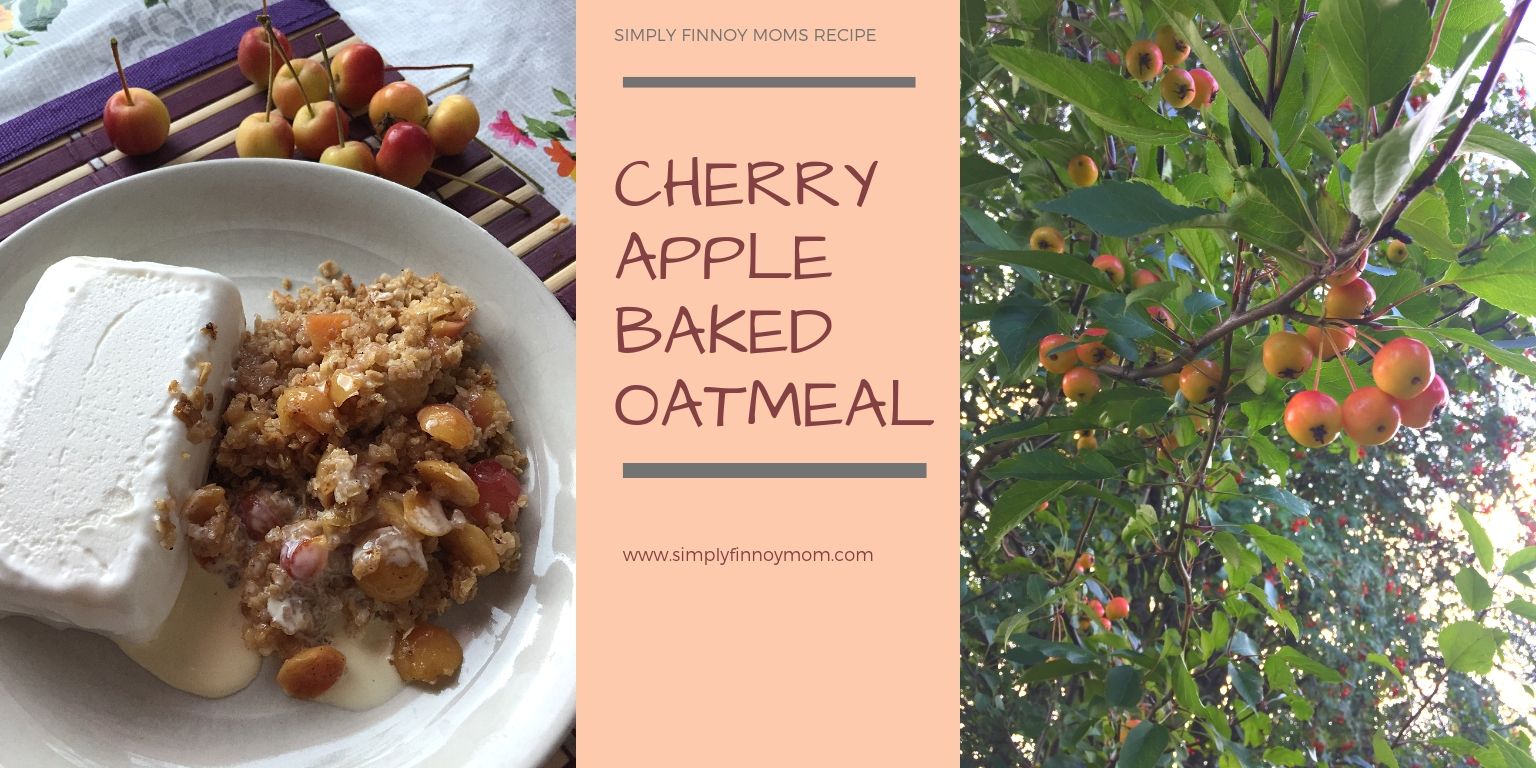 In this blog post, I will tell you how I decided to make a cherry apple baked oatmeal. Have you seen a small apple somewhere in the park, in your neighbourhood and wonder what are those? Thinking are those edible or not? Don´t worry, I am the same as you until this summer came.

Cherry apple baked oatmeal is our dessert this Saturday. How that happen? I had been admiring this small tree in our yard this early summer when it finally blossoms. I noticed that it was a similar kind of flower as our apple but I had no idea what it is. Had the guess that it is koristeomena which means for direct English translation means decoration or ornament apple.

How did I know this cherry apple?

This late summer came and my kids were picking up an apple for their snacks. We have the white transparent apple that is one of the first apples to be ready and ripe. While my boys were eating their apple straight from the tree, they saw this little apple beside it. I didn’t know there were fruits there! Of course, there were flowers before so next will be fruits. How I didn’t noticed those before the boys.

The thing is, I was surprised that my boys were about to pick some, so I said, “do not take that! It is not for eating!” I actually thought it’s not edible. Decoration or ornament is not good for eating right? Then I took a picture and send to my friends and ask, is this edible?

Yes I am expat in here, I know

Funny me I know! I am an expat here, we do not have an apple tree in my home country. This tree just bears fruits after us living here in this house for 10 years now. There are these trees around the house before we moved here, which I recognize except this one. I had no idea about this because it stays a small tree, about 2 meters and never gave flowers or fruits before. Only this time, so I needed to ask.

To my relief, it’s edible. My son calls it cherry actually because it is almost the same size as our cherries too. So this is I think the cherry apple? See how small they are compared to the normal apple.

From then on, I always pick a few and eat. It’s not so sweet, it’s a little sour&bitter too. Still, I wanted to try if it will be good for baking. This weekend while my youngest is sleeping outside the house in his pram, I decided to harvest this cherry apple. I probably pick it up too early, maybe it will be totally red later on? I don’t know, as I said I am not familiar with this yet.

My three years old likes helping me in the kitchen so he suggested to help me when he saw I have these little apples with me. Well, he was so amazed at this cherry apple always. So I started slicing to separate the part of the apple where the seeds are. Its quite fun and takes time. Luckily my youngest is sleeping a long day nap today.

Anyway, the safest recipe I think will go with this is the cherry apple baked oatmeal. Recipe how did I make it found below.

It seems that this summer is an introduction for me to know my own yard, finding what is edible in here and learn that actually here, there are many foods and free. Check out my discovery of the nettle and dandelion as food.